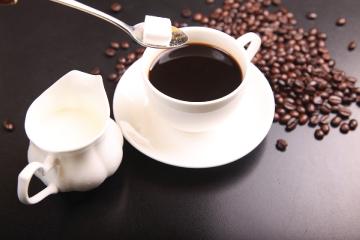 Caffeine is a plant product that is most commonly found in coffee beans, tea, energy drinks, soft drinks, cocoa and chocolate. Caffeine is also found in some prescription and non-prescription drugs, including cold and allergy medications and pain relievers.

Why do some people use caffeine?

Caffeine acts as a stimulant by exerting an effect on the central nervous system. The effects of caffeine on the body may begin as early as 15 minutes after ingesting and last up to six hours.

Caffeine is recognized as an addictive substance by the World Health Organization (WHO). However, when consumed in moderate doses (up to 400 mg per day, or four to five 8-oz cups of coffee), caffeine can help some people feel more alert and less sleepy. Most individuals consuming moderate amounts will experience few, if any, negative side effects.

What are the health benefits of caffeine?

Caffeine may reduce the risk of developing certain neurological disorders such as Parkinson's and dementia as well as certain oral cancers. Caffeine-containing products such as coffee, teas, and chocolate are rich sources of antioxidants and phytonutrients which may have health-promoting effects.

What are the negative side effects?

Too much caffeine may lead to sleep deprivation and a tendency to disregard the normal warning signals that the body is tired and needs rest. Caffeine does not replenish energy or prevent emotional fatigue; food and sleep are the only remedies for these. When normal sleeping patterns are continually disrupted, mood depression may occur. Too much caffeine may also lead to anxiety-related feelings such as excessive nervousness, sweating, and tremors.

If you want to avoid some of the unintended side effects of caffeinated beverages (e.g., jitters or sleeplessness), switching to decaffeinated drinks may help.

Are there long-term health risks?

People who take medications for depression, anxiety or insomnia, high blood pressure, other heart problems, chronic stomach upset or kidney disease should limit caffeine until discussing the matter with a clinician.

Study results in this arena are mixed. There is some evidence to support the use of caffeine to enhance athletic performance, but it is highly individual.

Can caffeine help a person 'sober up'?

Contrary to popular belief, drinking coffee will not help someone who is intoxicated become sober.

What is caffeine withdrawal?

People who stop drinking caffeinated drinks may notice several side effects, especially if they are used to consuming large amounts of caffeine. Some symptoms of caffeine withdrawal include headaches, irritability, nervousness, nausea, constipation, and muscular tension. These symptoms usually appear about 12-24 hours after someone has stopped consuming caffeine and usually last about one week. It is recommended that you gradually decrease your caffeine intake to avoid withdrawal symptoms.

Is it okay to have caffeine during pregnancy?

Some studies show an association between high doses of caffeine and an increased rate of miscarriages, premature deliveries or low birth weights. However, complicating factors such as smoking and alcohol use were not accounted for in these studies. In very high doses, caffeine can affect fetal breathing and heart rate. One 8-oz cup of coffee per day during pregnancy is generally considered safe.

If you are pregnant or planning to become pregnant, please discuss caffeine intake with your clinician.

Where can I get more information about caffeine content?

The Center for Science in the Public Interest lists caffeine content of food, drink and non-prescription drugs.

Caffeine Informer provides a fun calculator and other tools.

For coffee, caffeine content varies depending on the type of bean, quantity used, how finely beans are ground and brewing time.

For non-prescription drugs, it's a good idea to read labels.